The nation’s top infectious disease expert on Friday urged governors and mayors to “be as forceful as possible” to get people to wear face coverings.

Social distancing, an important factor in blunting the spread of coronavirus, can be difficult with more people going out, Dr. Anthony Fauci said.
“When you’re living your life and trying to open up the country, you are going to come into contact with people. And for that reason, we know that masks are really important, and we should be using them everywhere,” he said during a US Chamber of Commerce virtual event.
Americans are actually slowing down the re-opening the country by not wearing a mask, said Fauci, the director of the National Institute of Allergy and Infectious Diseases.
He said he respects the “spirit of independence in our country,” but says this is different.
People need to understand that we are in a very serious situation that necessitates communities pulling together, he said.
“If we could get more people to understand that, hopefully we’ll get more people who’d be willing to wear masks.”
He said he would “urge the leaders — the local political and other leaders — in states and cities and towns to be as forceful as possible in getting your citizenry to wear masks.”
The country needs to concentrate on the problems at hand and not worry about a second wave, he said.
“When you’re having up to 70,000 new infections … that’s something you need to focus on right now, as opposed to looking at what’s going to happen in September or October,” he said.
There were 77,255 new cases reported Thursday, topping a previous high set two days ago, according to Jhns Hopkins University. On Friday, the World Health Organization’s situation report said there were a record 237,743 new Covid-19 cases reported to agency in the past 24 hours.

The director of the National Institutes of Health, Dr. Francis Collins, said he’s “optimistic” an “effective treatment” for Covid-19 will be available in two to three months.
“There is a lot of progress in therapeutics,” Collins told CNN’s Wolf Blitzer. “We have two proven drugs — remdesivir and dexamethasone, both proven in rigorous randomized control trials, which is the only way you really know if something works.”
Remdesivir is an antiviral drug that has been shown to reduce the amount of time people are ill with Covid-19. Dexamethasone is a steroid that may reduce the rate of deaths among seriously ill patients.
“I’m optimistic, without being able to be confident completely, that we’ll have something maybe as soon as two or three months from now, in terms of an effective treatment.”
Collins is also optimistic about the development of a successful vaccine by the end of the year.
“The first vaccine trial, as you probably heard, building on very successful preliminary data, will get started around about July 27 all across the southern part of the country where the virus is spreading.”
Collins says if one of the vaccine trials is successful, there will be “tens of millions of doses ready to go by the end of 2020, the end of the calendar year.”

Debate over wearing masks heats up

An unpublished document prepared for the White House coronavirus tax force says 18 states in the coronavirus “red zone” for cases should roll back reopening measures amid surging cases.
The “red zone” is defined as areas “that during the last week reported both new cases above 100 per 100,000 population, and a diagnostic test positivity result above 10%.”
Georgia is among the 18 states in the “red zone” for cases and among the 11 states in the zone for test positivity.
As some states struggled to tame the virus, the debate over wearing face mask is heating up Georgia Gov. Brian Kemp sued Atlanta Mayor Keisha Lance Bottoms on Thursday over her efforts to require face masks in public places.
Friday on CNN, Bottoms accused Kemp of playing politics and wasting taxpayer money with the suit. President Donald Trump this week visited, and Bottoms pointed out he was breaking city law by not wearing a mask.
And in Utah, a public meeting about a mask policy was abruptly canceled when people without face coverings packed the room. The crowd booed when it was called off.
“This is the exact opposite of what we need to be doing,” Utah County Commissioner Tanner Ainge said at the meeting room in Provo. “We’re supposed to be physically distancing, wearing masks. This gathering violates current health recommendations.” 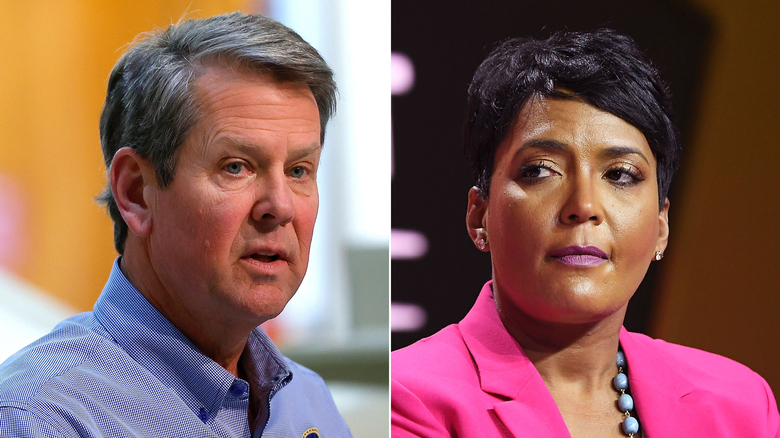 Colorado Gov. Jared Polis told CNN he used data to implement a statewide mask mandate for public indoor spaces.
“We care about our economy and saving lives and we need to learn from our cities and counties that led the way and mask-wearing economy,” he said.
Thursday, Polis announced residents must wear masks when they are in public indoor spaces and are not able to social distance. The order took effect at midnight.
A top corporate lobbying group on Friday renewed calls for “consistent federal and state guidelines on safety measures, including face coverings.”
The Business Roundtable said it’s been lobbying for those mandates since April, according to a press release. The group, chaired by Walmart CEO Doug McMillon, represents the CEOs of America’s biggest companies.
Several major companies, including Walmart, will require customers at all their US stores to wear masks.

For five consecutive days, Florida has led the nation in coronavirus cases per capita.
Currently, Florida is averaging just over 55 cases per 100,000 people according to analysis of Johns Hopkins University data.
Florida took over the top spot from Arizona on Monday. Arizona — which had held the top spot for over a month — dropped to third, behind Louisiana.
The main floor of Florida’s Emergency Operations Center in Tallahassee has been emptied out for cleaning and is closed until Monday after 12 workers tested positive, Jason Mahon, Florida Division of Emergency Management communications director, told CNN on Friday.
Miami-Dade “hospitals have more COVID patients in ICU beds than they have available ICU beds,” a spokesperson from Miami-Dade Mayor Carlos Gimenez told CNN in a statement.
The ICU capacity is “above 100 percent,” the statement says.
“Some hospitals have begun to operate more ICU beds than they would normally operate. Our target was for that metric to be at or below 70%. In other words, we wanted to have 30 percent of beds available for non-COVID purposes,” according to the statement.
Gov. Ron DeSantis said he won’t order gyms in the state to close, claiming a healthy lifestyle will put people at lower risk for developing severe cases of coronavirus.
“If you are good shape you have a very, very low likelihood of ending up in significant condition as a result of the coronavirus,” DeSantis said at a news conference.
DeSantis lauded the state’s testing capacity, saying more than 100,000 people are tested each day. He added that the state’s positivity rate has stabilized and even declined. The governor said the state’s positivity rate is about 12-13%.
Share
Facebook Twitter Pinterest Linkedin